So you are looking to install a fire alarm system in your building. The question, however, is which approach should you take? Should you go with the simple conventional fire alarm system? or the more intelligent addressable fire alarm system? In this article, we will discuss the pros and cons of both types of systems in the hope of assisting with the best method for you and your project. 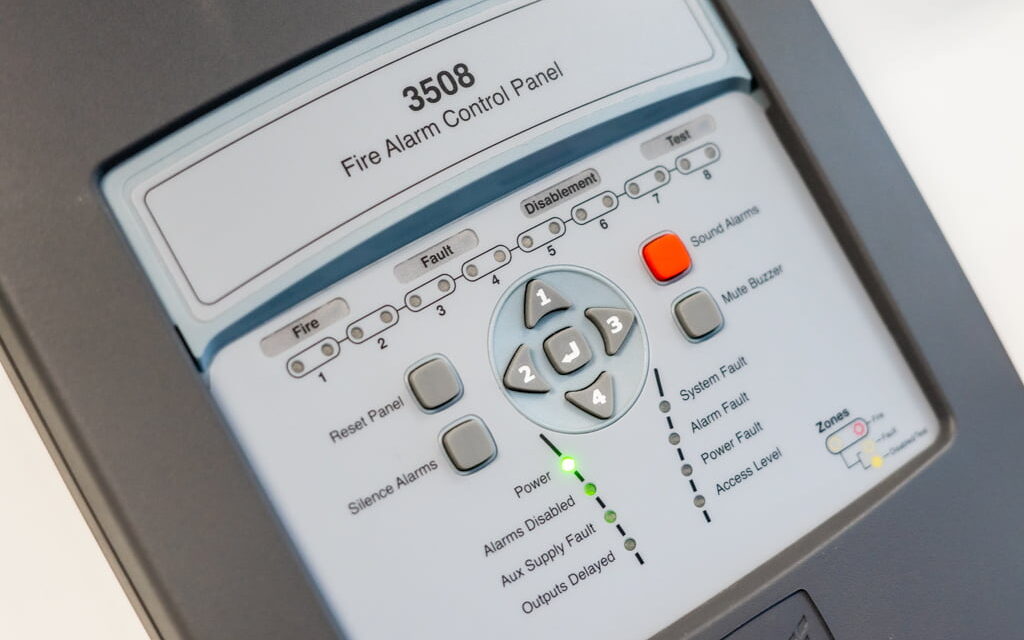 Sounder circuits are the radial circuits that control the fire alarm sounders and Visual Alarm Devices (VADS). These circuits can accommodate multiple sounders, but they are generally limited to each sounder’s power consumption, along with how much output the panel offers on each sounder circuit. 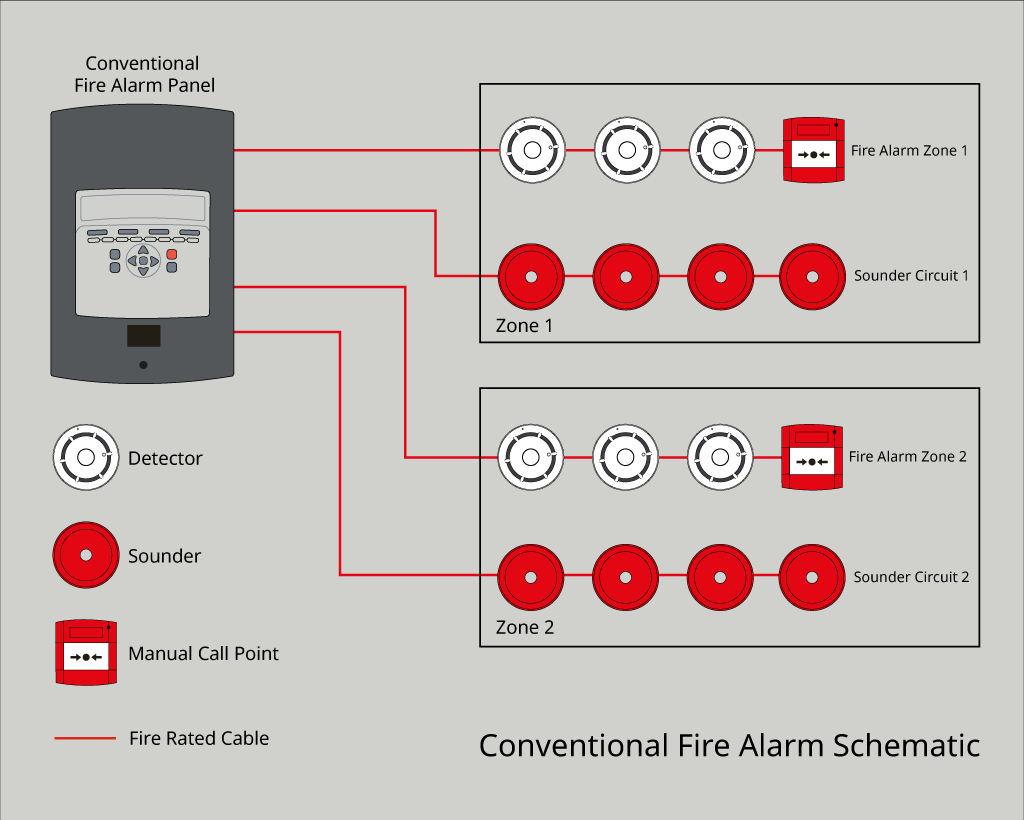 Due to the conventional system’s simplistic form, should a fire or fault occur, it will only highlight a fire/fault in that area (on the specific zone). It cannot identify precisely where the fire outbreak is or which specific detector has registered a fire/fault. It only identifies which zone has the fire or circuit fault. The problem with a conventional system is that it makes fault finding time consuming for fire alarm engineers. It means an extended time on site and, in hand, more costs when repairing the system despite the lower price of the fire alarm devices and fire alarm panels.

Conventional systems are pretty basic in electronics due to their simplistic nature. Therefore, the build cost is considerably less than an addressable system. The small price to produce the equipment means it is cheaper for the consumer to buy. It makes a conventional system an affordable solution to a fire alarm system in smaller projects like shops, small offices and small schools.

Protec offers a range of conventional fire alarm control panels known as the 3000 range. The range provides a low-cost solution to fire detection. Should you want to know more about these systems, take a look at our conventional systems on our product pages.

An addressable system utilises a loop configuration containing all the fire alarm devices, including sounders and beacons/VAD. A loop wired system uses less cable compared to that of a more extensive conventional system.

The fire alarm panel continually communicates with the devices on the system. It enables the fire alarm panel to identify the exact device or manual call point in an alarm condition. Therefore, reporting a fire’s location, system faults and false alarms in a matter of seconds. 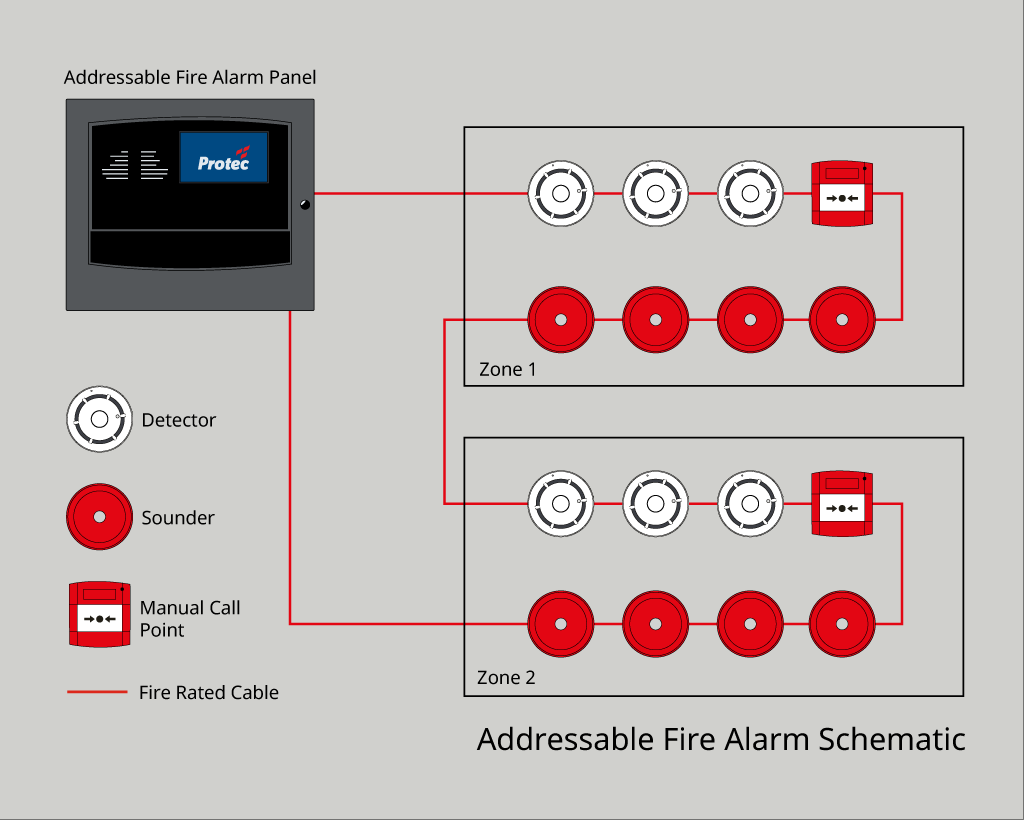 But is it possible to have the best of both?

In the past, only medium and large projects benefitted from addressable systems. However, Protec has developed the 6100 fire alarm control panel. The 6100 is a single loop addressable fire alarm control panel. A cost-effective addressable solution for small to medium fire alarm systems. The panels are priced slightly higher than a conventional panel. However, the time and money saved installing the 6100 over that of a conventional system due to the loop configuration soon makes up for that initial cost. With that in mind, plus the benefits that addressable systems offer, it makes the Protec 6100 a serious contender in featuring in your next small building project. 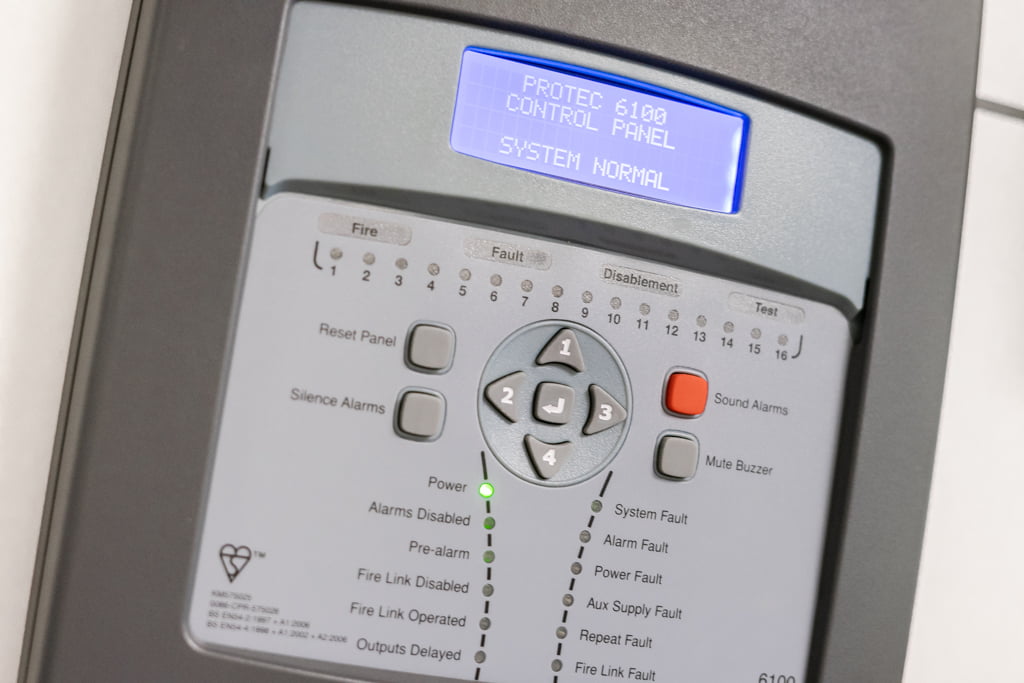